WELCOME TO THE LOVERS - LUXURY APARTMENTS IN VENICE

This accommodation springs from an idea my family and I had of wanting to design something different from the usual accommodation facilities found in the city: carefully thought-out apartments for those who are in love with beauty, comfort, life, Venice and love itself.

The apartments have been furnished with the finest finishing touches: extra-large beds, 25cm shower heads, induction hob with LED lighting, romantic wallpaper, antique furniture combined with crystal tables, designer sofas and chairs; all to make your stay, however short, of the highest quality.

We have created a little love nest for you, where you can switch off for a few days, to be together, or to enjoy family time in the city of Venice whose every corner amazes no matter the season. 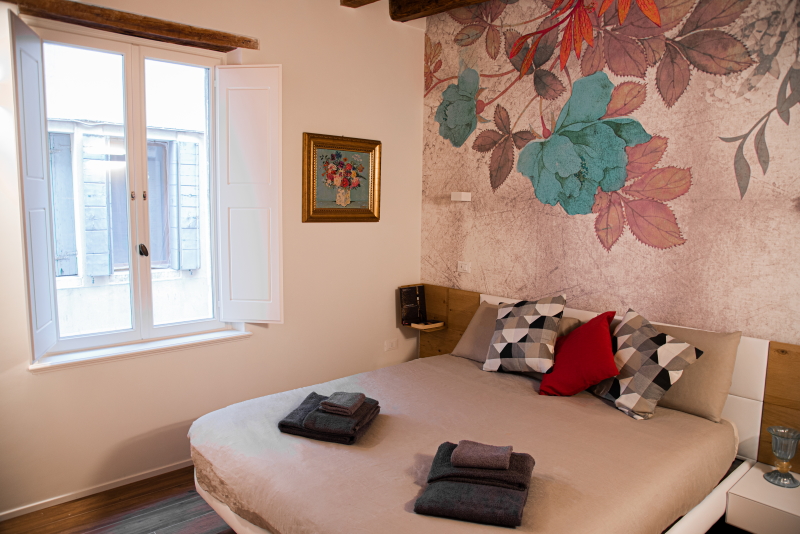 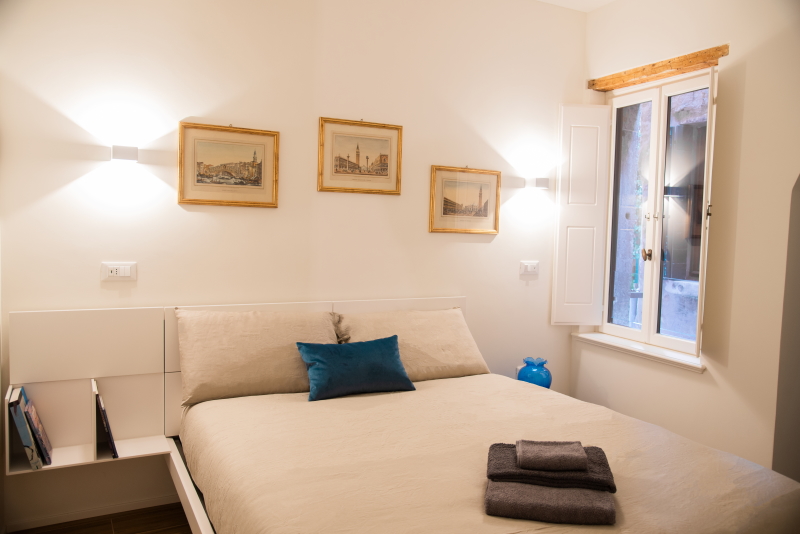 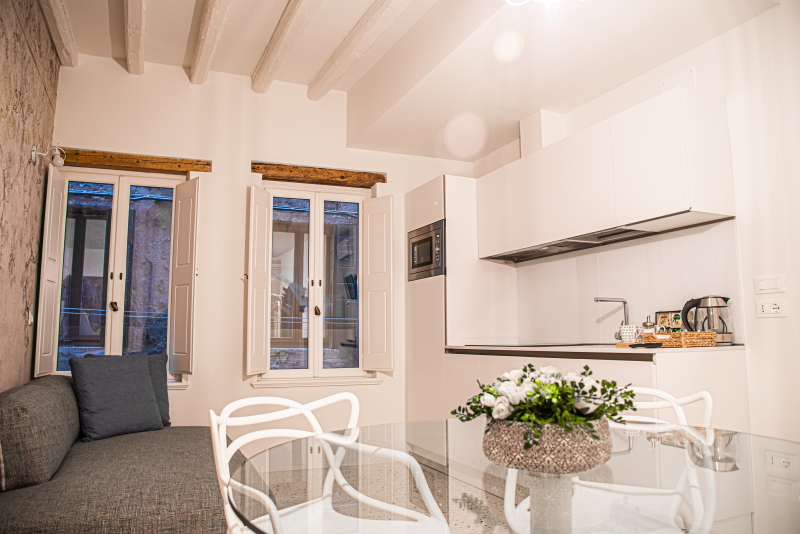 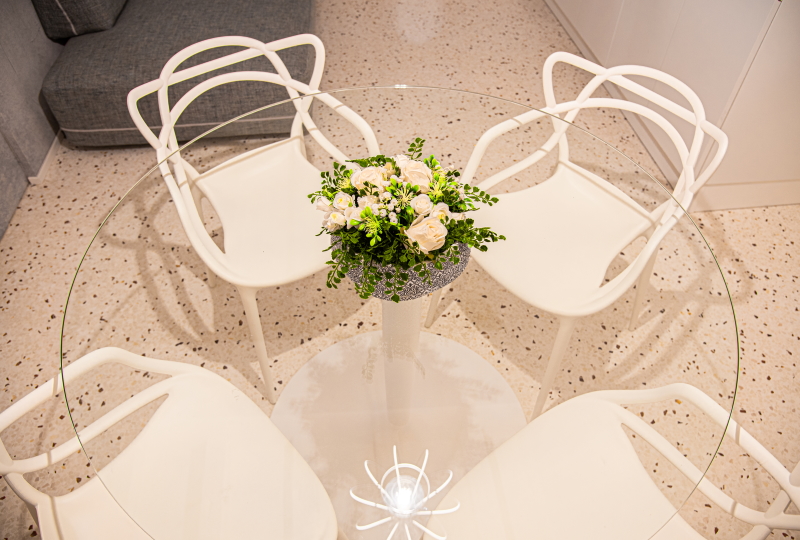 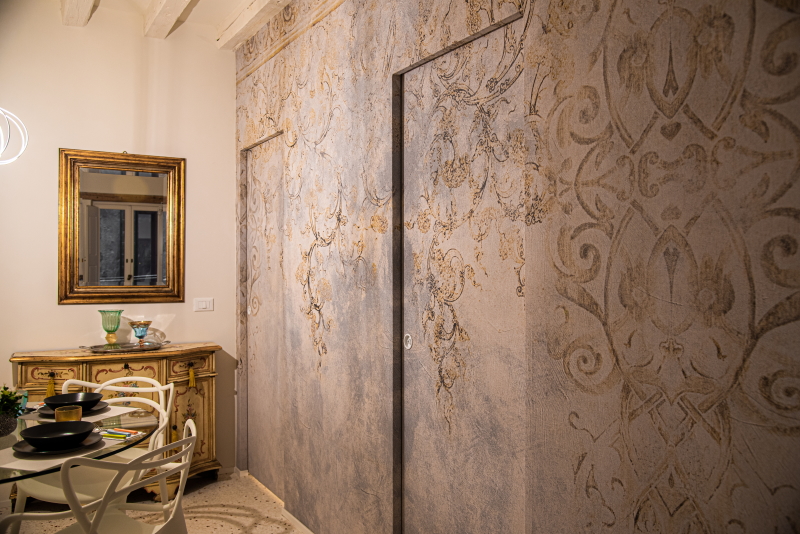 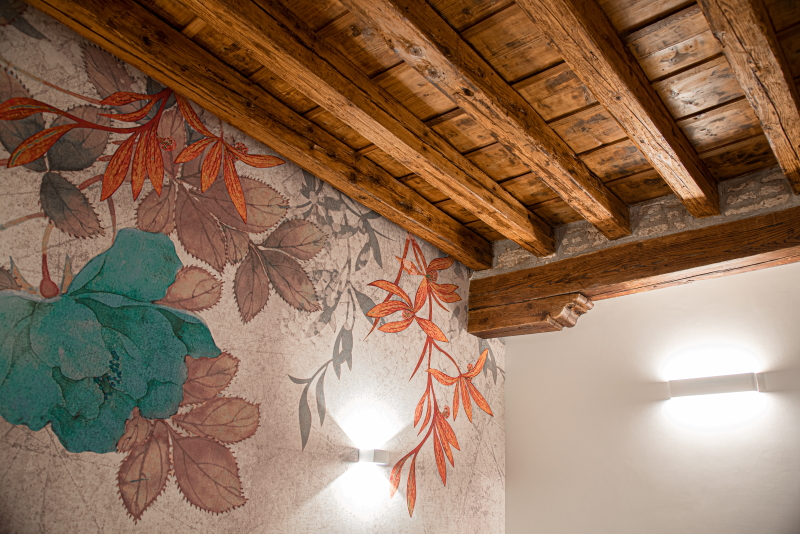 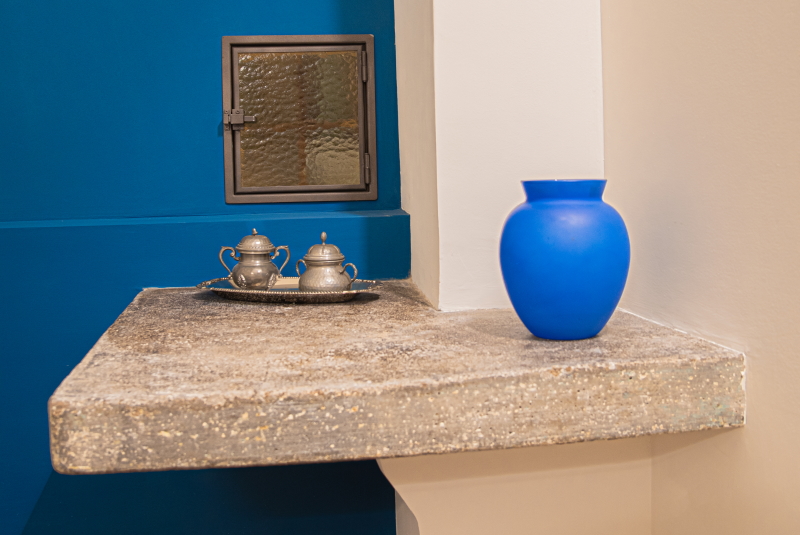 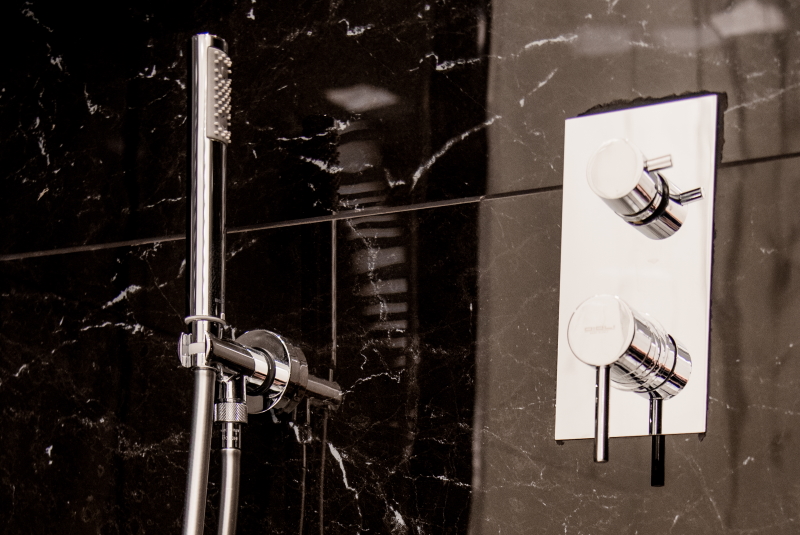 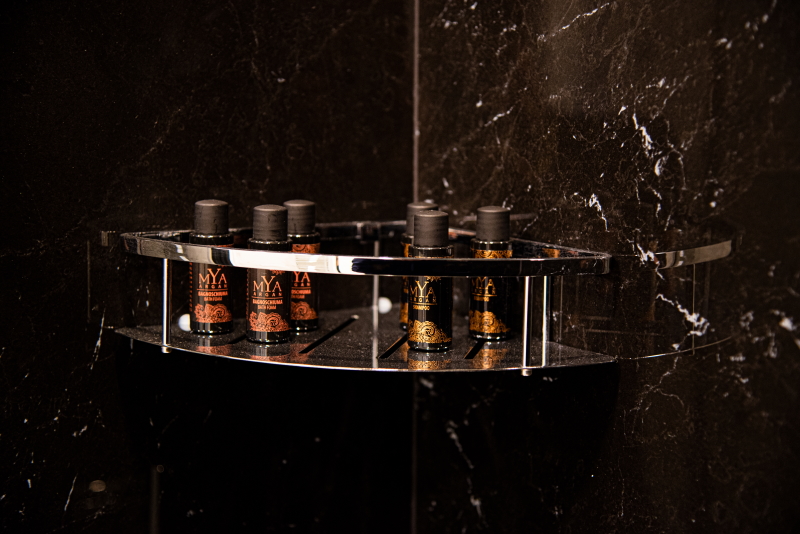 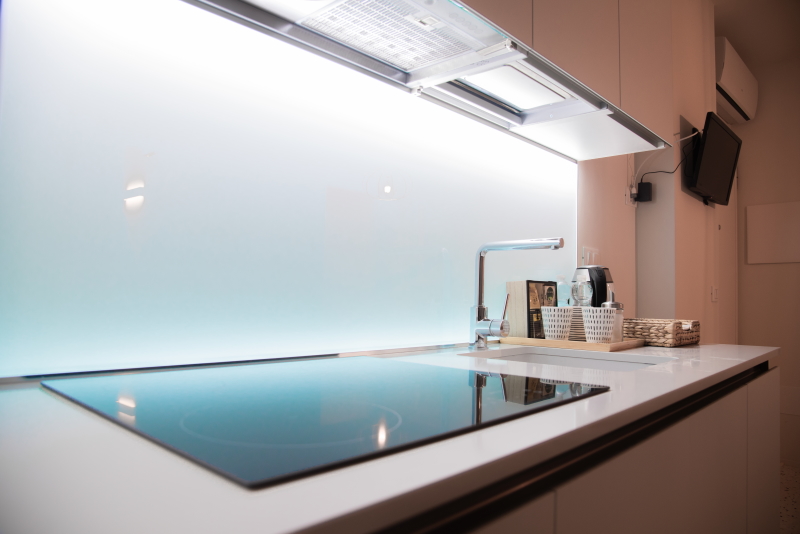 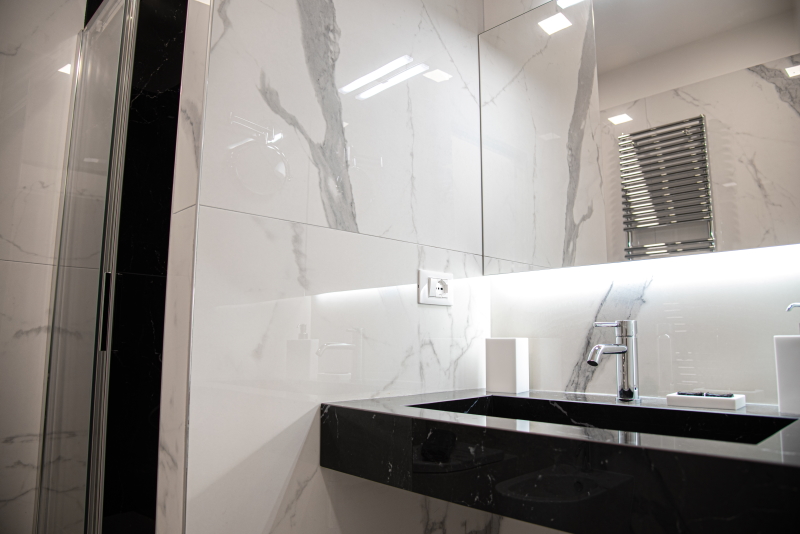 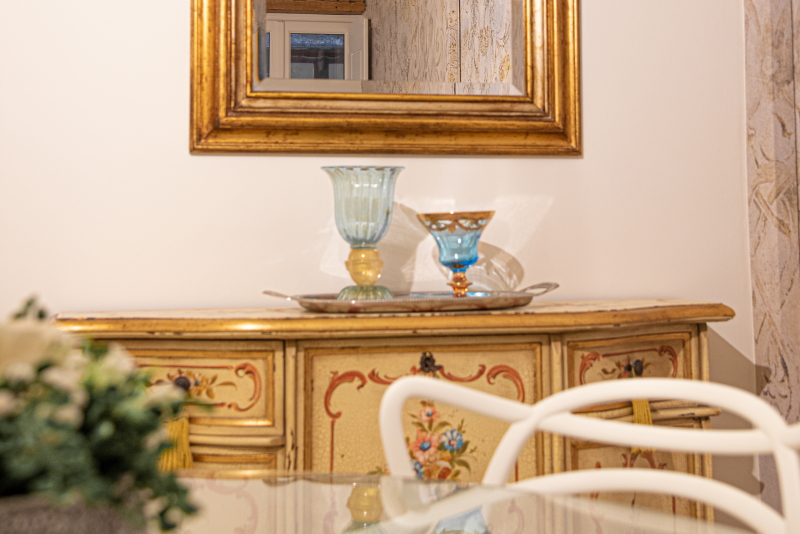 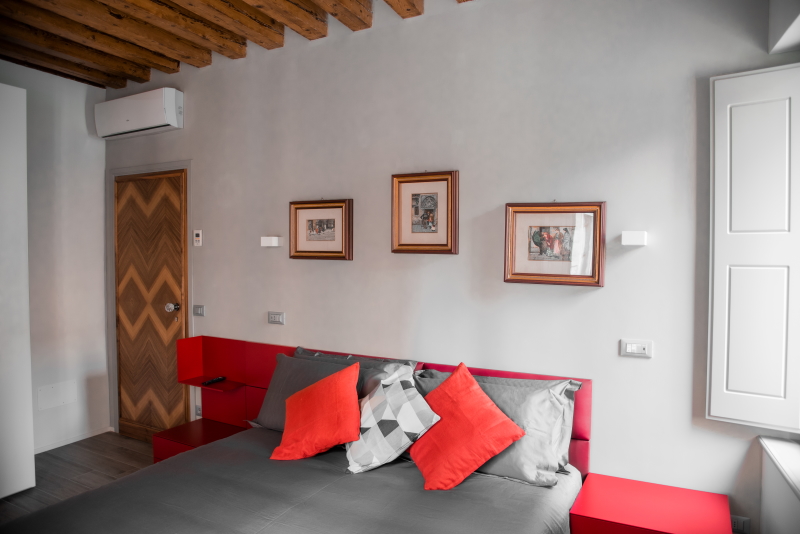 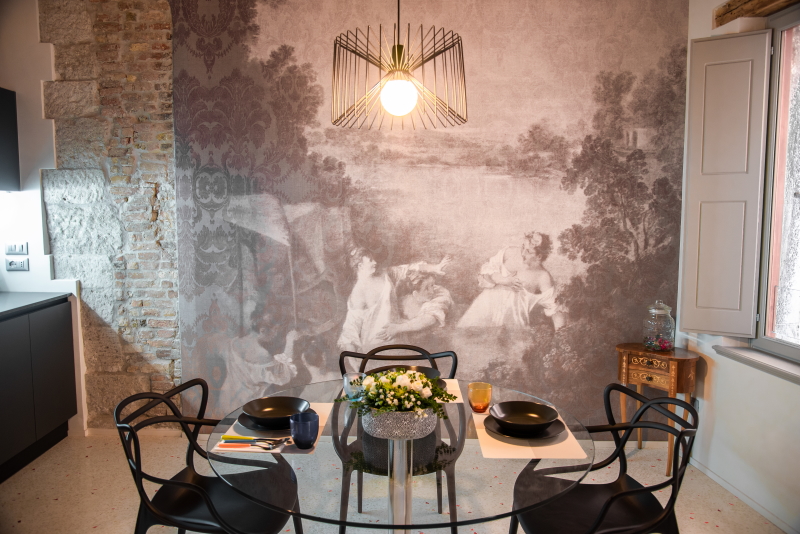 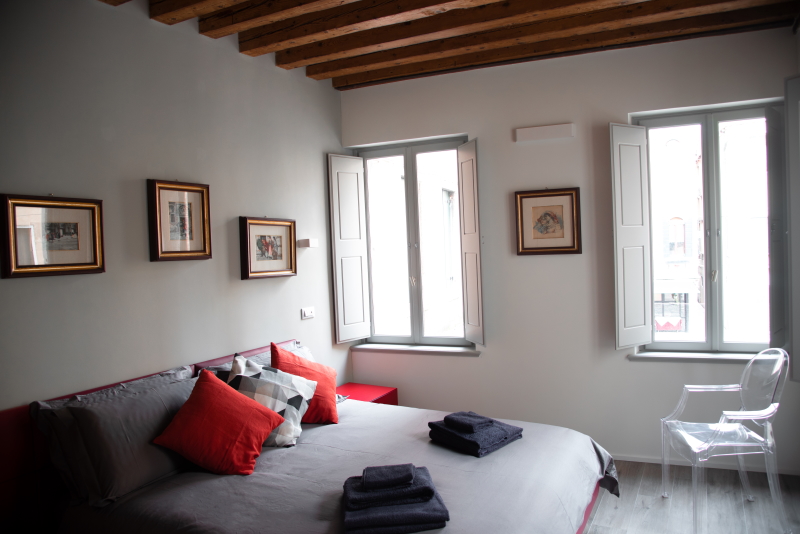 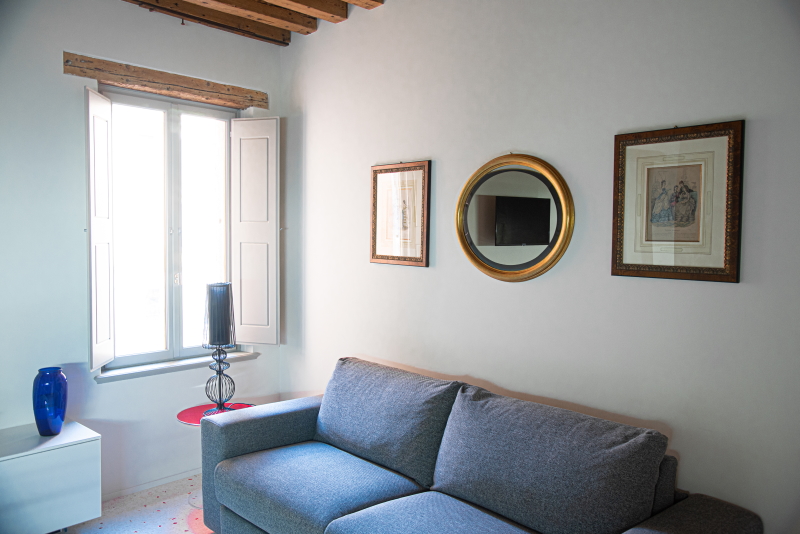 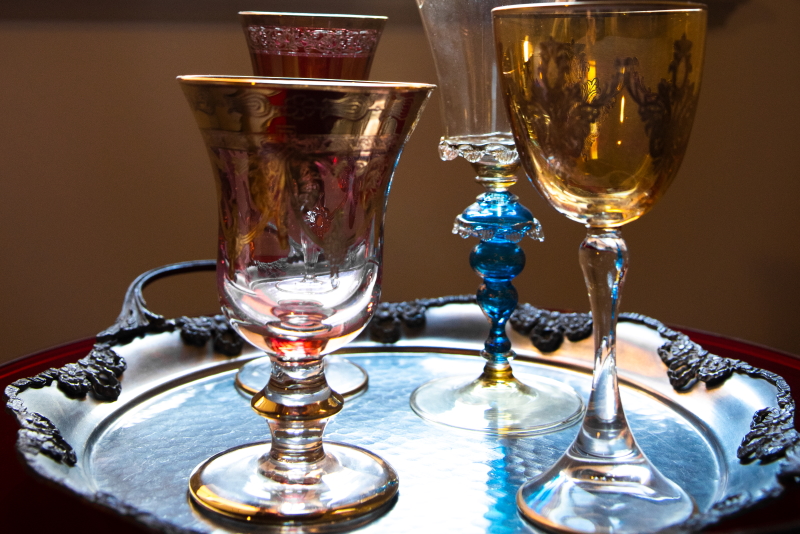 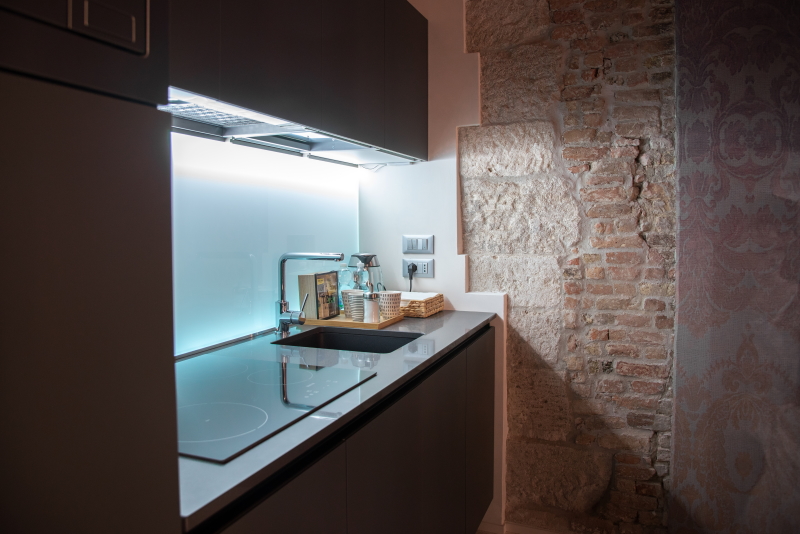 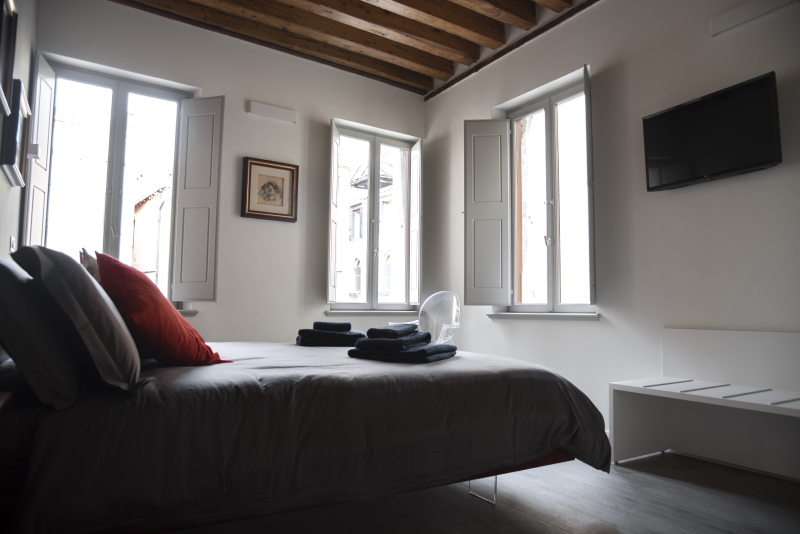 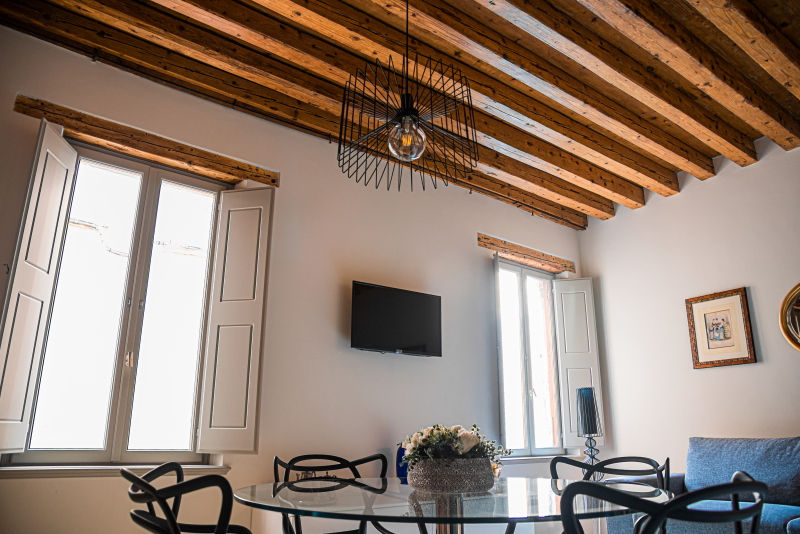 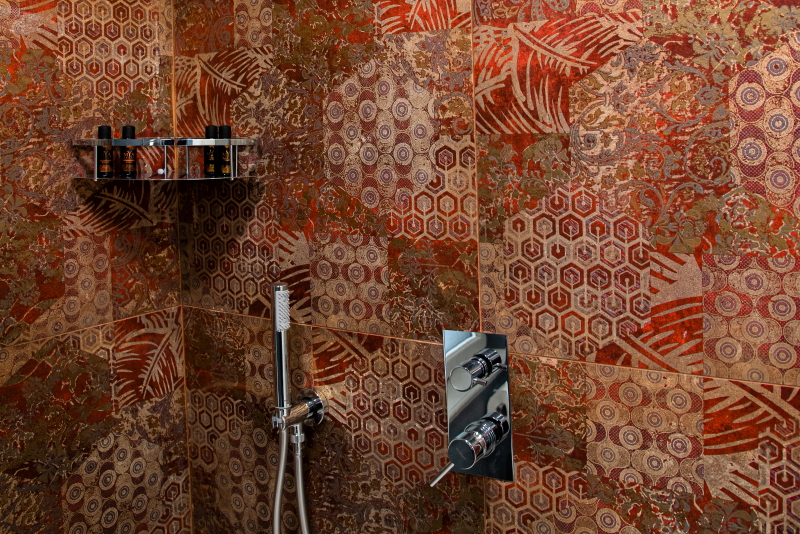 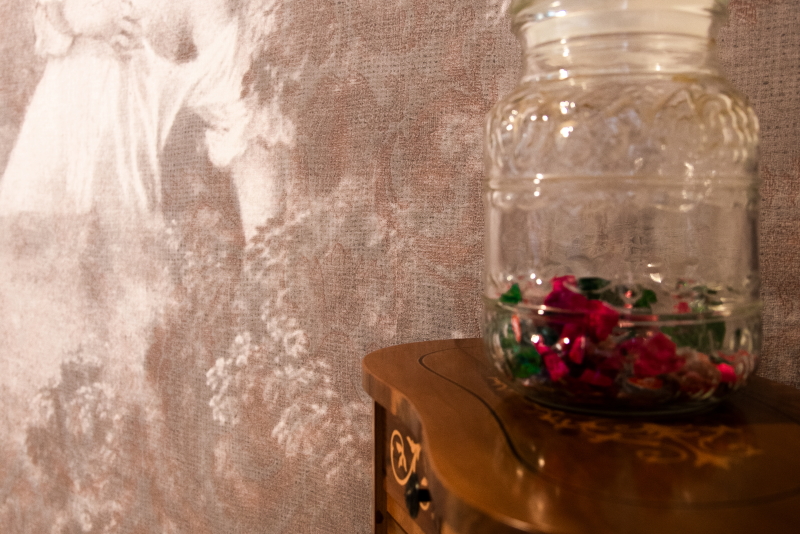 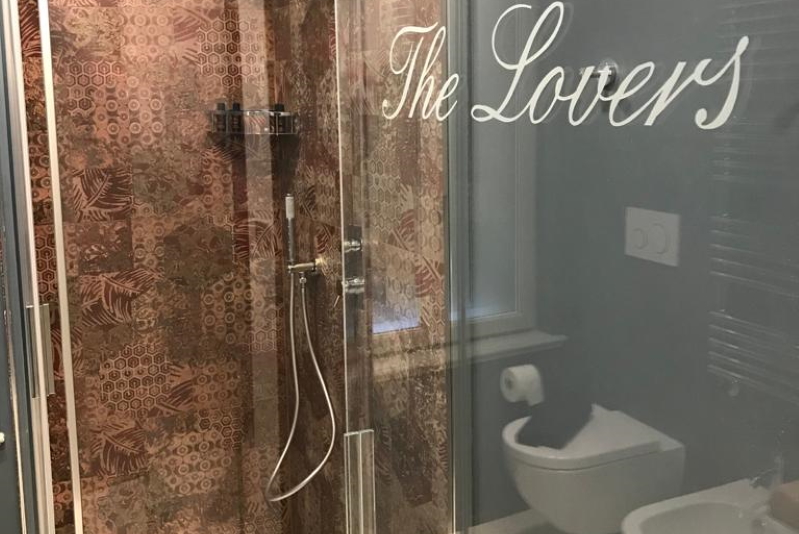 THE LOVERS - LUXURY APARTMENTS IN VENICE

The accommodation consists of two extremely elegant apartments which are located in Campo Sant’Aponal, in the San Polo district, a neighbourhood filled with people who live and work there; the area also has plenty of typical Venetian restaurants known as “bacari”. The liveliest area of the neighbourhood is without a doubt Rialto, with its fish and fruit and vegetable markets: a busy, bustling, typically Venetian place.

It is in a central location and is served by the “San Silvestro” vaporetto stop, just two minutes away.

The entrance to The Lovers is in Calle Sbianchesini, at number 1159; you will receive a phone message with the entrance code for the ground floor door and an access code for the door of your apartment.

HOW TO GET TO THE LOVERS - LUXURY APARTMENTS - VENICE

Venice is a magical place unlike any other city in the world because there are no cars here and everyone goes on foot, walking around lulled by the lapping of the calm lagoon waters, enveloped in the fog on a winter’s night, and kissed on the shoulders by the summer stars.
For those who prefer getting around the canals by Vaporetto (a small lagoon boat), we recommend buying day tickets online at the VENEZIAUNICA website. These tickets are also valid for the bus both in Venice Lido and Mestre:

DEPOSIT: Our accommodation requires a €200.00 deposit per apartment as security against any damage to the building, the furniture and/or furnishings. This deposit will be refunded at check out after the apartment has been checked.

The Lovers is a completely renovated building, consisting of two apartments situated on the same floor of a small 16th-century building. Each apartment is independent and has its own entrance, and there is a small bookshelf in the communal entryway for exchanging books.

Each guest is free to borrow books during their stay or to take a book home with them, leaving one they have finished with in its place.

“When you finish a book and close it, there is an extra page inside. Yours.”
(Fabrizio Caramagna)

The tours we suggest take advantage of the accompaniment of professional guides born and raised in Venice.

The Heart of Venice: Saint Mark Basilica and the Doge’s Palace

This tour focuses on the main sightseeing of Venice: Saint Mark’s Basilica and The Doge’s Palace.
The Basilica houses the relics of Saint Mark and is decorated with more than 8.000 square meters of golden mosaics: absolutely a must see! The Doge’s Palace is the former government building of the Venetian Republic and it’s a feast for the eyes to admire it while listening to some fascinating facts about the political history of Venice and its connection with other European countries.

This tour will lead you through some districts off the most beaten tracks, to enjoy the real life of a pleasant city. With an expert guide, you won’t miss the distinctive details of the beautiful architecture from different centuries, and you won’t stop taking pictures because some of the most picturesque corners are on our way. At the same time, you will realize that Venice is way more than its most famous attractions! It’s an actual and alive city!

Food and Beverage are always an essential aspect of a country. But maybe in Italy this is even more true, because here food has so many emotional implications that sometimes it becomes a ritual! In Venice there is a tradition which connects different generations: “bevar un’ombra”, to drink a “shadow” of wine. To accompany the wine, is agreeable to eat something: a little “cicchetto” -tidbit- makes the perfect combination. The variety of cicchetti is huge: slices of crusty bread stuffed with different cheese or cold cuts, and decorated with flowers; or little portions of fish or polenta; meatballs and fried vegetables… And in the meantime, Venetians love to converse about the day…. This is the perfect tour to taste the real rhythm of Venice!

Travelling with kids can be challenging… but Venice will surely remain etched in their memory. As a tour guide, and mom of two, I consider kids my VIP guests: happy kids make happy parents! Therefore, I have created a tour that takes them in a treasure hunt through Saint Mark Area. They will learn a lot about Venice without even noticing it! At the end of the tour, good explorers will receive a little surprise!

Let us guide through an interesting walk to the discovery of the most mysterious and unknown places in Venice. The tour will take you to the “Sestiere” of Cannaregio and San Polo crossing the famous Rialto Bridge and visit the oldest market of the city.

If this is your first time in Venice it is the perfect  introduction to the city!

One of the most fascinating aspects of Venice is its rich and , still active, artisanal traditions! Have you ever wondered where all the Gondolas you see teeming the canals were constructed? And still are !Venice is also very famous for its Carnival tradition…masks are everywhere in the city! What is the meaning behind them? And what are the traditional masks made on ? The Venetian Arts & Craft walking tour will take you inside three different businesses in the city where you will have the opportunity to personally meet and take with the local artisans!

Curios to know(and taste) the old Venetian bakery tradition? Why do not start in the morning! This tour will take you inside three different old local bakeries while exploring two different “Sestieri” of the city. We will take you outside of the main touristic paths to show you the real authentic Venice.

Have you ever seen Venice by boat? Enjoy the stories from your tour guide while exploring the small Venetian canals and admiring the Doge’s Palace from a different perspective!

The Lovers is in the city center, here you can truly breathe the real essence of this place, in fact it's a street where venetians live, the location is fantastic, it's only two feet away from the ferry ride. The apartment is very nice thanks to all his comforts, but most importantly, it's very elegant.

The Lovers is in the city center, here you can truly breathe the real essence of this place, in fact it's a street where venetians live, the location is fantastic, it's only two feet away from the ferry ride. The apartment is very nice thanks to all his comforts, but most importantly, it's very elegant.
https://www.theloversluxuryapartments.com/en/testimonials/a-lovely-place/

I've been a guest at The Lovers, fantastic experience, the "CASANOVA" apartment was almost like an exclusive boutique hotel. The atmosphere here is very intimate, from the room you can witness a beautiful view of Campo Sant'Aponal.

I've been a guest at The Lovers, fantastic experience, the "CASANOVA" apartment was almost like an exclusive boutique hotel. The atmosphere here is very intimate, from the room you can witness a beautiful view of Campo Sant'Aponal.
https://www.theloversluxuryapartments.com/en/testimonials/excellent/
5
2
The Lovers - Luxury Apartments a Venezia

Hi, I’m your host, Sara.
My goal is to make sure you have an unforgettable stay. I have worked very hard to create an exclusive place where the watchword is “privacy”.

I wish my guests to have a unique experience in Venice, to keep in their hearts and remember forever.

I am at your service on request in order to help you best organise your stay.

Entry is secured by codes that I will send to you before your arrival by phone message.

Who were Veronica and Casanova?

Veronica Franco, a cultured woman and acclaimed poet in sixteenth-century Venice, was also a courtesan. A little too smart for the standards of the day and with a bewitching charm, she was accused of witchcraft. She has always been remembered, however, as an example of a free, independent and proud woman.

Veronica was born in Venice in 1546 to “native citizens” of the island. Their economic status meant that she could present herself socially as a young lady of the middle class. She therefore received a good education along with her brothers.

From a young age she was prepared for the profession of courtesan by her mother, who had also been a courtesan herself.

Veronica married a doctor but soon freed herself from the union. After separating from the husband she no longer cared for and having had a child, she returned to the profession in order to support herself, becoming an “honest courtesan”, cultured and high ranking. Her clients were mainly prelates, artists, aristocrats and men of letters.

Giacomo Casanova, undisputed symbol of the adulterous side of Venice, was a man of many faces. Writer and poet, adventurer and explorer and, surprisingly, secret agent, he led a dissolute life filled with luxury, elegance and lust.

Born in 1725, he travelled a great deal as a young man, but never forgot his home city of Venice. He was a libertine, seducer of courtesans and actresses as well as aristocratic ladies and nuns, which eventually led to his imprisonment in “The Leads” prison, charged with dissolute conduct, affront to religion and incitement to freemasonry. His imprisonment ended with a daring escape, followed by a necessary exile around Europe. He returned to Venice after eighteen years of travels. Back in the lagoon city, he offered his services as a spy for the same inquisitors that years before had convicted him, in order to be pardoned. He had a rich, adventure-filled life, but he is remembered not so much for that as for his “spicier” adventures. He recounted his adventures seasoning them with details about his love life, counting more than 120 women seduced, but for him, it was not the number that mattered so much as the capacity and desire to truly love the women he conquered, falling in love with each one, without thinking of the numbers.

TOP PLACES TO VISIT NEARBY:

FILL IN THE FORM TO CHECK AVAILABILITY